Nearly one million households will receive protection from harmful secondhand smoke pollution in their homes if a U.S. Department of Housing and Urban Development (HUD) proposal is implemented.

"We have a responsibility to protect public housing residents from the harmful effects of secondhand smoke, especially the elderly and children who suffer from asthma and other respiratory diseases," said HUD Secretary Julián Castro in a statement. "This proposed rule will help improve the health of more than 760,000 children and help public housing agencies save $153 million every year in healthcare, repairs and preventable fires."

The proposed HUD rule would positively impact 400,000 New Yorkers in New York City Housing Authority (NYCHA) developments, where residents are much more likely to report smelling cigarette smoke in their homes that came from another apartment or outside than New Yorkers overall. 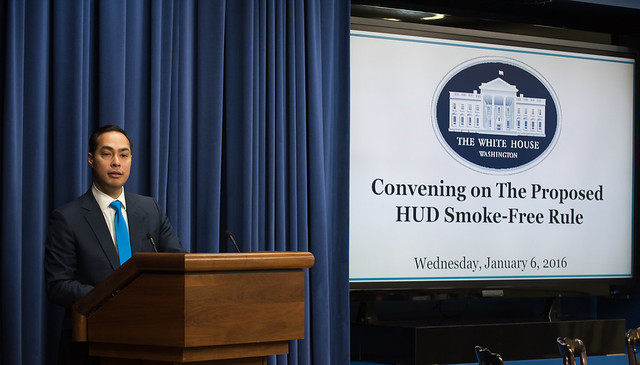 In New York City, luxury condos, co-ops and rentals are increasingly smoke-free. But New Yorkers who depend on NYCHA public housing and whose families are subjected to dangerous secondhand smoke pollution in their homes have few options but to stay where they are and endure the harmful exposure.

“Living free from the dangers of secondhand smoke should not be a luxury that is out of reach for any New Yorker, especially for NYCHA residents who are twice as likely to report having asthma as NYC adults and the more than one-third of NYCHA residents who report having one or more children with asthma,” wrote Kwan, in NYC Smoke-Free’s official comment on HUD’s proposed rule.

“Everyone – no matter where they live – deserves a chance to grow up in a healthy, smoke-free home,” said U.S. Surgeon General Vivek H. Murthy. "There is no safe level of secondhand smoke. So, when 58 million Americans – including 15 million children – are exposed to secondhand smoke, we have an obligation to act. That is what Secretary Castro is doing with this proposal."

The public comment period for HUD’s proposed rule on smoke-free public housing ended in January 2016. The final rule is expected by the end of 2016.

Stay up to date with the latest developments.